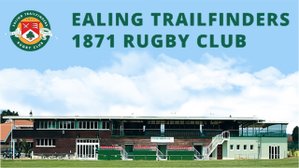 The 2019-20 season brought some exciting changes for rugby in Ealing.

To ensure that we can continue to offer rugby in Ealing at an appropriate level for all players we decided to create a new club with RFU affiliation. The new Club, playing as Ealing Trailfinders 1871, is closely linked to the existing Ealing Trailfinders structure, shares the same facilities but operates independently within the RFU regulations and compete independently within the RFU league structure.

In the era of professional and amateur rugby it is important that clubs have the right structure to provide all rugby players with a pathway that suits their rugby ability and ambition. By having two clubs with strong links and co-operation this can be achieved and helps to develop rugby in Ealing and the surrounding area.

The new 1871 structure not only enables us to play RFU league rugby in the London and SE Division but also give players opportunities to play Middlesex Merit Table rugby as well as social and veterans’ rugby through the Exiles and Evergreens squads. This ensures we can offer rugby for players at all levels.

This also gives a strong development pathway for the very successful Ealing Trailfinders U18 Performance Programme.

The Ealing Trailfinders Professional structure is a separate entity but the strong links will enable players at the highest level to transition across either through the new Brunel University Scholarship Programme or through the Championship side’s own Academy structure.

The successful Minis and Youth sections will continue to be at the heart of Ealing Trailfinders with pathways in to Senior, and the Brunel University affiliated programme.