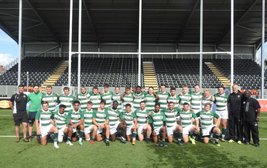 Blend of youth and experience helps 1871 to overcome Japanese

Lights go down on first round of Ready4Rugby

With an injection of youth from the club's U18 squad, Ealing 1871 eventually overcame a spirited Japanese team in a contest well refereed by Pedro Diogo.

On a cold and foggy evening at the Wasps ground in Acton, the 1871 squad arrived to find that only half a pitch was available until the match was scheduled to reach its half-way mark, as Wasps Ladies were booked to train on the other half. The unexpected constraint inevitably meant that space was at a premium in the early period, although Japansese found a gap to open the scoring with just a few seconds gone. It did not take long for Ealing to respond, with Tim Diamond taking a scoring pass from Josh Goddard. A penalty try and a score by young Ben Pink put Ealing into a lead they would not relinquish, and further tries by Euan Jones and Kavan Fitzpatrick increased the gap to 5-2. A third Japanese try was followed by 1871 scores for Evan Poole, put into space by Jones, and a second by Jones himself, with a mazy run through the despairing defence. With the full pitch finally available, a break by Fitzpatrick put Roberto Rutolini in the clear, but Japanese stayed in contention, pulling back to 9-7 before Ealing moved 11-7 at the end of the third quarter. After a 12th try early in the last quarter, the game ended in farcical circumstances when the floodlights were suddenly turned off on the dot of 9 pm with 10 minutes left to play.

Congratulations to the fast and skillful U18s in the squad, who we look forward to seeing again when, it is hoped, the new lockdown proves effective allows a return to action before the end of the year.